skip to main | skip to sidebar

Bring On The Men!

I thought there simply was not a more fitting title for this blog.

My friends know I'm up for just about anything fitness-related. Whether it's a new series of fitness DVDs, an invitation to participate in a mud run, or more recently, an opportunity to work out with some fit folks at Pure Barre at their newest location in Mission Viejo. I heard about Pure Barre through friends, and I might add an important factor, my female friends. I accepted an invitation to Pure Barre's "Bring On The Men!" the weekend of June 19-20. Guys were encouraged by their female friends to experience 55 minutes of the Pure Barre Technique (PBT) that has the motto: Lift, Tone, and Burn! 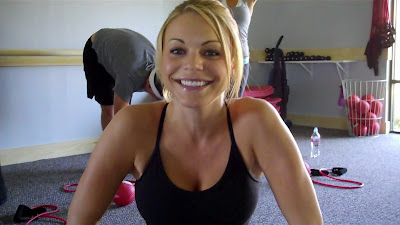 My friend Ashley Affeldt (everyone say hi to Ashley, above) sponsored me for this unique opportunity, and, wow... let me tell you all about my day at Pure Barre...

WARM UP: As with any fitness program we started with a warm up. Granted I've not worked out in front of room full of mirrors in a while, I found it actually helped me see how my form was during this phase of the workout. It also gave me a chance to see all the guys and gals in my class, so there was that bonding experience going already. 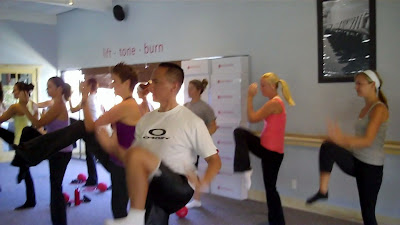 As you can see I'm already out of sync, this whole reverse-image-in-the-mirror and following Monica Pommier (Instructor, Owner of the Mission Viejo & Newport Beach studios) movements, was confusing for me. How will I last the full 55 minutes? On the one hand my lack of coordination was saved by some floor exercises and some work with the weights. On the other hand, I soon realized this was the calm before the storm. 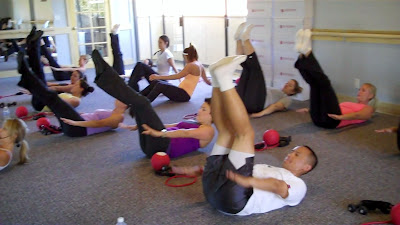 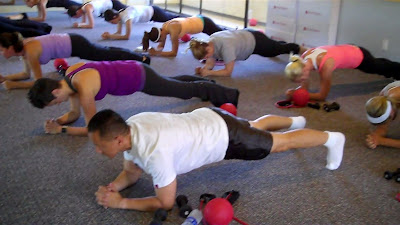 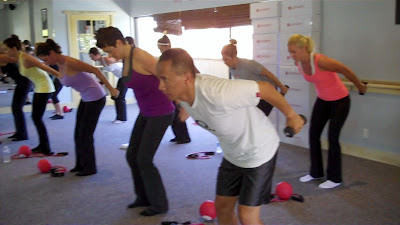 The competitive nature in me prompted me to sneak a peak in between sets at some of the other fellas and it looks like we were all on par with our female counterparts thus far. 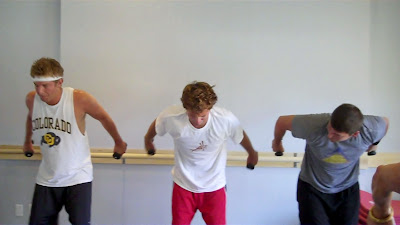 CORE WORKOUT: Soon the core of the PBT began: Thigh, Seat, and Ab Work. I underestimated the intensity of the PBT as Monica led us through some of the most intense, but small, isometric movements combined in a class. If not for the high-energy music I would've been too focused on the burning feeling these movements created on key areas of my body.

About a month ago I suffered a crazy hip injury that knocked me out of my workout routine for three weeks, and at this point I wasn't sure if I should tell Ashley that this "Manly Man" may have to bow out. However, I found that the exercise movements of the PBT provided the burn, but since it did not involve any bouncing or jumping, I would have to find another excuse to not go through this intense program. Monica had to help adjust my stance a couple of times, but other than that, I continued with the program. 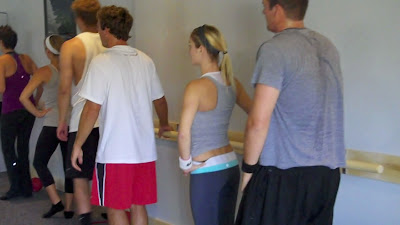 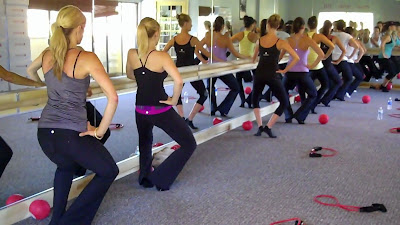 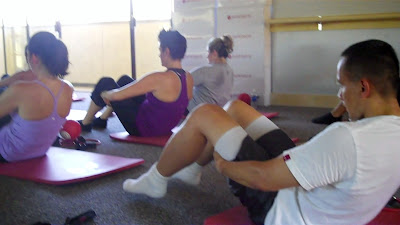 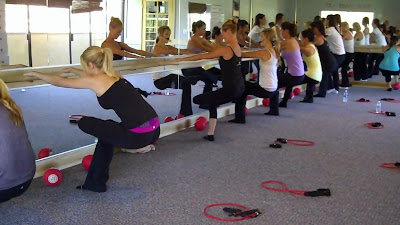 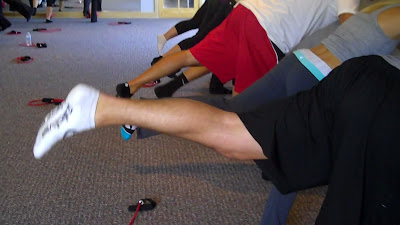 After various focused exercises my abs, hips, glutes, and arms were telling me in unison that THIS had to be one of the most intense 55 minutes I have ever worked out...yet my recently-recovered hip was still intact! I spoke with the other guys in the class and we all had the same sweaty, exhausted, and relieved look ... giving me some cue that I was not the only guy wondering how Ashley, Monica, and our female classmates could do this regularly and not smell of Icy Hot.

I'm very grateful for Pure Barre welcoming me and the other guys to "Bring On The Men" as guys very seldom get a chance to participate in fitness classes for females. Personally I like to try various programs and routines, as I'm usually asked by both guys and gals alike, "What would you recommend if I want to...?" I consider myself very well-versed in some of the innovative programs out there, but was not so much with the ones that especially focused on goals and areas on most females' checklists. I also consider myself a pretty fit individual and may have done a great job masking my pain. In the days that followed my abs, my thighs, and my glutes were STILL burning from ONE session at Pure Barre! I cannot make that statement about my previous or current programs.

I hear that Pure Barre invites us guys twice a year to experience how the PBT works out the body through zero- to low-impact movements, providing effective results in a short amount of time. You can be sure I'll have my guy friends check it out for themselves, if I haven't already flooded them with stories from my one day with Pure Barre. As for my female friends, you all are fortunate to have the opportunity to participate in the Pure Barre classes. It's no wonder talk about Pure Barre has caused more studios opening up. It works and more folks want to experience it. On Saturday, June 26 the Mission Viejo studio will have a Grand Opening Party. Please check it out for yourself and speak with Monica, other Pure Barre instructors, and the Pure Barre students! 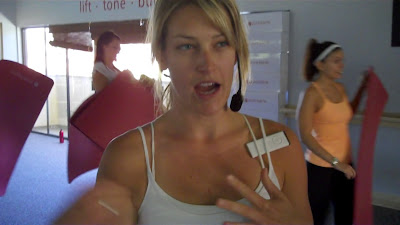 Thank you, Monica (above) for inviting us guys to Pure Barre for "Bring On The Men!" It was quite a rewarding experience!
Posted by OakleyOC at 5:53 AM

OakleyOC
Orange County, CA
I'm an Orange County family guy who lives and breathes Oakley products, as well as nurturing an addiction to the iPhone and iPad. I'm also a proud supporter of The Boot Girls and The Boot Campaign (bootcampaign.com). Member of the Tour de Sight team (TourDeSight.org). MY FAMILY: wife and two boys. MY OAKLEYS: about 73 "favorite" pairs of Oakley eye wear, lots of shoes/sandals and apparel for each season. MY IPHONE: jailbroken 16gb iPhone4

What's up with this site?

My blog takes current events topics and looks at 'em from a sports-oriented angle. Everyone knows the plain vanilla version, but sometimes it takes a different method of delivery to get the point across.

Much strategy prevails over little strategy, so those with no strategy cannot but be defeated. Therefore it is said that victorious warriors win first and then go to war, while defeated warriors go to war first and then seek to win.